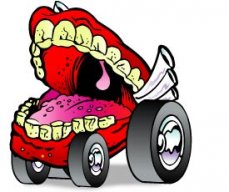 Don’t Be “The Motormouth Narcissist Writer”

I’ve shied away from a lot of writer’s groups because most of them have that guy in it. You know who I’m talking about. It’s who I call the motormouth narcissist writer. I’ve been in two writer’s groups who have had this personality type among them and I hope you’re not one of them. They’re the person who can’t stop running their mouth about how great they are. Many times, their personality overlaps with “The Gump” where they have a story in their life for every little topic you talk about.

The worst one of these was a guy I met at The Greater Los Angeles Writers Conference 2019. I won’t name him because he’s got books available  and bad publicity is still publicity.

My wife and I were talking with two ladies about what each of us was writing as well as our personal lives. Each of us was giving each other equal air-time and we were having a really good conversation.

Then this guy sits down and plops down his two self-published novels. From the get-go, I was irritated by his moldy body odor. He goes into the pitch for his second published book which actually sounded interesting since it was a war novel. He went into his pitch for the first and that’s where he started to get real annoying.

He said he had a $25,000 movie deal for his first book which was stuck in development hell (how convent) and they would need to pay him another $5,000 to hold onto the rights longer.

Then he goes into this schpeil about his background and all the things he’s done in life. Everytime he paused, he’d laugh, cock his head to the side, and smile like a used car salesman. Oh, and he’d give us a nice, long look at those cavity-ridden teeth. Nasy.

He then starts talking to the ladies we had made friends with and began his schpeil over again, pointing out the wrong novel as having the movie deal.

Finally when he ran out of crap to say, he got up and left the table after he handed out his business card. We managed to avoid him for the remainder of the conference until the last day.

It was during the first page reading event. This guy submits readings from both of his self-published books. That’s incredibly rude because people are lucky to even get one reading done at these events. Not only that, but this guy’s work was already in print. That’s not the point of this event. It’s for unpublished folks to have feedback on their opening pages before they hit the submission circuit. This guy just wanted to stroke his ego. Thankfully one of the agents recognized the name and they all skipped it, otherwise I was going to call his ass out in front of everyone for wasting time.

If you are one of these personality types, get over yourself and get some humility. I know you’ve got to schill yourself because no one else will. At the same time, be considerate. It also doesn’t hurt to have good hygiene.

If you’re in a writer’s group, do everything you can to avoid letting these people in the group. They’re like a cancer. They’ll hijack it and make it all about them.