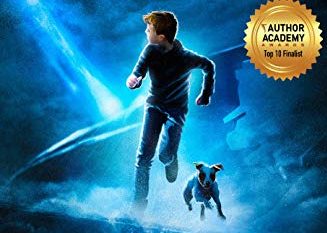 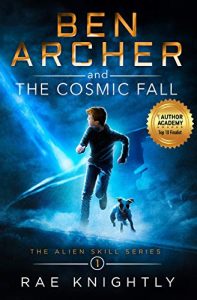 Back in early 2018, indie author Rae Knightly offered EARCS of Ben Archer and the Cosmic Fall (The Alien Skill Series Book 1) and I never got around to reading mine until now. Please accept my deepest apologies, Rae. Now that I’ve seen what a great story this was, I’m really kicking myself for not having gotten to it sooner. It’s a great YA family-friendly story for anyone wanting to dip their toes into alien or conspiracy theory science fiction before committing themselves whole-hog to it.

Cosmic Fall is about a boy who witnesses an extraterrestrial event which the Canadian government wants to keep hush-hush. The CSIS (Canada’s equivalent to the FBI) incarcerate and intimidate any witnesses to the event who all refuse to mention Ben’s involvement for his protection. Ben is eventually made and has to go on the run from CSIS Agents Connelly and Hao. Ben’s mother and his lovable Jack Russell terrier named Tike become fugitives with him.

Yeah, let me talk about Tike for a moment. For not saying anything, he’s hard not to love. I’m already a dog lover, but I’m especially partial since I have two dogs which are part-Jack Russell terriers. This dog is ride-or-die and completely loyal to Ben: following him to school, looking out for bad guys, and even risking his life to save Ben’s mother’s life. 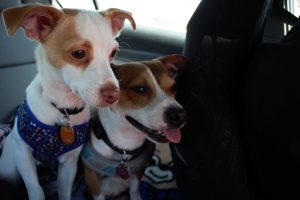 I found it refreshing that a story about alien conspiracies and government cover-ups didn’t center around America’s government. It’s definitely because Knightly lives in Canada, but still something different than the usual FBI, CIA, MIB acronyms thrown around.

While on the run, Ben gets help from many trusted allies, including his grandfather, the town hobo, and even some out-of-this world assistance. There’s already two sequels, so you know Ben’s going to make this one out alive, but I was on the edge of my seat, really wondering if Ben’s friends and loved ones were going to make it.

As for presentation, the book’s cover is fantastic and professionally designed. I love it.

I’ll close the spoiler-free portion of this review out with a strong recommendation. I do have some gripes with some of the technicalities, but all of them would require spoiling the plot below.

Ben Archer and the Cosmic Fall is available on Amazon.

For this story being about aliens, government men in black, and fugitives, the body count is surprisingly small. Then again, for a children’s book, maybe you could consider it high.

A technical gripe I had was there was one scene where there was a power outage and Ben cursed his grandfather for not having a cell phone. I’m not sure if it’s like this in Canada, but in America, traditional landlines will still operate if the phone itself is so basic that doesn’t require power. They’re rare, but they do exist and a grandparent would probably have one.

I was on the edge of my seat from when Ben’s mother lost her inhaler until she got it back again. I might be exaggerating, but that sure felt like a third of the book. That point in the story felt so serious to me because my wife’s best friend had passed away from an asthma attack. Really tragic stuff.

Ben’s newfound ability to issue orders to animals (his Alien Skill) was really cool to see in action and his awkwardness sold it to me that he was far from a master at it. Tike was the only animal that seemed to absolutely and immediately get what was being asked of him and it make sense since they’ve been together for so long. I felt this could have been further sold to me by way of Ben having some difficulties with Tike’s obedience prior to the Cosmic Fall event.

Speaking of which, much of the lead-up to the actual Cosmic Fall needed to be at the start of the story versus it being a flashback. I understand Ben has amnesia about that night due to the trauma he took in, but I think seeing the way Ben’s world was (especially his loving relationship with his grandfather and Tike) prior to the Cosmic Fall would have hurt us so much more when Ben’s normal life was taken away from him.

It especially would have made Grampa’s death so much more powerful. We hardly know him when he died, but we learn in the rest of the book what he meant to Ben and his mother. It seemed backward to me. It’s shown throughout that he’s very resourceful and toward the end, we see that he’s strong enough to perform a fireman’s carry. That seems unlikely for someone I perceive to be in their 60’s unless they’ve got some sort of military tough-guy background. Perhaps we’ll explore this in later books?

I liked Mesmo’s ability to astral project himself to Ben’s location while in government captivity. It allows him to be a mentor, help Ben out of smaller situations, but when the government scientists start prodding him, he’s gone when it’s time for Ben to face a REAL challenge with what he was previously taught.

Despite these nitpicks, the story was very well crafted and I hope it continues to be a great success. The series is off to a good start.