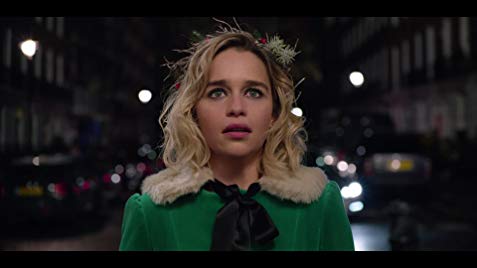 Two Tuesdays ago, we saw the advanced screening of “Last Christmas.” I was pleasantly surprised and would recommend you see it despite its flaws. It’s from the director of “Bridesmaids” so you know there’s going to be some good, vulgar humor (although not as much as what was in Bridesmaids).

herself, Emilia Clarke) who’s had a bad streak of luck (much of which was brought upon herself). She works a seasonal retail job getting bossed around by the militant “Santa” (Michelle Yeoh).

One day, she meets the dashing, but silly Tom (Henry Golding) outside the shop who sets her on a journey of self-discovery and self-improvement as she falls for him.

As with Bridesmaids, all of the cast has fantastic chemistry with one another. At the halfway mark, Kate meets her mother (Emma Thompson) who she had been dodging since she arrived in London at the start of the movie. Thompson utterly steals the show in every scene she is in as the overly-concerned Yugoslavian immigrant mother. The movie’s funniest scenes are with her.

A small gripe is that while Kate’s parents and sister are very eastern European looking, Kate looks nothing like them. Her character’s lack of an accent is forgivable since she’s the youngest sibling and would have picked up English at an earlier age.

Another gripe was the “public service announcement” scene where Kate witnesses some Londoners who tell some Yugoslavian immigrants to, “Speak English or go back where you came from.” With the current flux of Muslim immigrants and refugees, I would have thought the negative attention would have shifted away from the Yugoslavian ones. I’d love to hear the opinions of any Yugoslavians who currently live in London.

Emilia Clarke sports some cool fake tattoos on her arms and fingers in this movie, probably to sell the idea that she’s a wild child. One goof made it into the final cut where one of her finger tats had the ink running.

Henry Golding was a great choice for Tom and nailed the part. With all the calls for more Asian men to be cast as leading men in romance films that have nothing to do with race in their plot, it was refreshing to see that answered.

As the title suggests, the music of George Michael is also prominently featured, especially “Last Christmas” and for very good reason.

Before going into spoilers, my biggest advice to be able to enjoy this movie is to just shut your brain off toward any science the movie presents you with and just roll with it. It’s not like Hallmark movies are any more accurate. 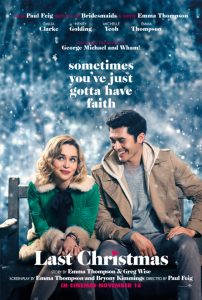 The movie had two big plot twists which I’ll talk about now that you’ve been warned. Both felt a bit contrived and seemed like more care could have gone into setting them up.

The first big doozy is we find out Kate has received a heart transplant prior to the movie’s opening. This was a HUGE reveal that was hinted at by Kate’s mom’s overprotective tendencies and referral to her “being sick.” When it’s finally revealed, Kate shows her surgical scar to Tom, but despite some of the low-cut shirts she wears, we never see the scar before or after the scene which threw me off.

It’s also pretty significant that I don’t ever recall her taking any anti-rejection medicine through the whole movie (please correct me if I missed this). People who have had heart transplants MUST do this for the remainder of their lives. This could have been used as an awesome foreshadow and I felt was a wasted opportunity. Kate frequently drinks alcohol throughout the movie and I was actually surprised to read that it’s perfectly fine to have small amounts of alcohol after recovering from a heart transplant, but Kate frequently gets drunk. This is plot relevant since one of the morals is for her not to squander her second lease on life.

Another wasted opportunity with the heart transplant plot was that Kate sleeps with a few different men in the course of the movie. I would think at least one superficial guy who was looking for a one-night-stand would have been weirded out by her scar. It’d be a way to show that the “style over substance” lifestyle wasn’t for her.

Lastly, the big reveal at the end, was that Kate’s new heart came from Tom and that he was a ghost all along. There were some clever setups to this (considering that Tom doesn’t interact with ANYONE but Kate). I’d have to watch the movie again to see how Kate gets access to his apartment and if I missed any other foreshadows (like the memorial sign on her park bench). I think it would have been really clever to have kept him from interacting with as few props as possible (other than the bike which he lost his life while riding).

I think the best setup of Tom being a ghost was how utterly perfect and playful he is. He behaves like a male love interest from a Disney movie. In fact, his constant dancing reminds me of the chimney sweep guy from Mary Poppins. I actually was predicting him being a ghost about 1/3 of the way through the movie and then they had him show Kate how to break into the ice rink. I was like, “Oh, he has a bad-boy side after all! Maybe he’s not a ghost!”

In closing, I’d say this movie ticks off all the check-boxes to make a good rom-com. Some early reviewers are calling it a future classic, while others are calling it forgettable and I think it falls somewhere in the middle. It definitely has the potential to be popped in the DVD player every couple of years in December.