I stumbled upon Watersong as a featured book on Booksprout. It’s about a young Fey (fairy) boy named Aslan and a young woman named Briar who end up orphaned, discovering they are fire and water guardians respectively and go on a crusade against the evil Ishtak. 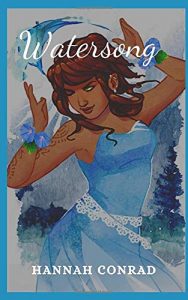 While there were some good ideas and some spots of awesome prose in this YA fantasy, the book, unfortunately, reads like a rough draft. I’m not posting this critical review to shame Conrad, but to point her in the right direction to improve her manuscript for a superior updated release. I plan to amend this review if she does so. On her Facebook author page, her boyfriend posts in great support of her efforts. She’s lucky to have a ride-or-die guy in her life the same way my wife and I support each other in our own writing efforts. I want to see Conrad polish this story into a better condition because it has a lot of potential.

Let’s start with the prologue. Please delete it because it gives a textbook breakdown of all the races. They’re all stereotypical fantasy races and behaviors (which is fine; Dragonlance did the same thing and it’s a multi-million-copy selling series), so there’s really no point in describing them. Just jump right into the story.

The absolute biggest issue is the spelling, grammar, and continuity errors in great abundance in the story. Fix these and most people will forgive the rest of the issues (not that those shouldn’t be fixed either). I get that it’s super exciting to publish your own story but if you wish to self-publish, please do not jump the gun and set it loose before it’s ready. Hire a professional editor to look at your work and if you cannot afford one, have a few select associates who are VERY adept at editing to look at your manuscript.

I also feel the story needs to be more fleshed out. There are some interesting cultures and traditions that I was hoping to get more of. It seems like barely the surface was scratched in this world. I also want to see some things described more. The main cast of characters get very good descriptions, but more sideline characters seemed glossed over too quickly.

Go back and ask yourself why things are the way they are and you’ll be able to make your world feel more lived in if you answer these questions for the reader. The book is very lean and was quick to get through, so adding even 50% more words would not bog the story down. In chapter 1, when Aslan’s family is killed, he recites a prayer which was a really cool cultural touch. I want to see more things like that.

In the past I’ve talked about how important a book cover is. This cover artwork by Amanda Thorpe is fantastic. It’s just as good as anything you’d see on the YA fantasy shelf at Barnes & Noble. I’d do something with the title’s typography to make it pop a little more and be more legible, but other than that, the front cover is fine. The back cover needs some work. A plain blue cover with white text won’t cut it. Check out the typography and graphic design of other YA books and you’ll get the idea of what to do.

Conrad put her ARC on Booksprout for people to read in exchange for a fair review and it would be a grave disservice to just lie and say everything is wonderful. I also want others to see some of the pitfalls self-published authors can fall into. There are TONS of folks who do the same thing.

Watersong is available on Amazon.