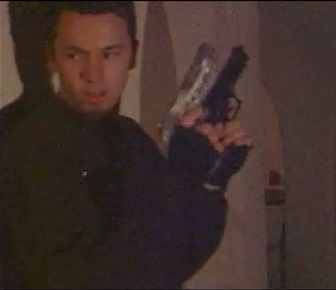 Videography and movie editing was never one of my majors in college or high school, but it has always been something I’ve wanted to keep coming back to. Most of my video work is on Vimeo to watch.

In the late 80s, my parents got a VHS camcorder and for three years of my childhood, my mom oversaw the creation of a “Happy Birthday Daddy” tape which included several skits on them for my dad’s birthdays. One year, on my dad’s birthday, we gave him some cookies to eat then we unwrapped and watched the tape. One of the bits on the tape was us making the cookies. We dropped them on the ground, glued them back together with Elmer’s glue, and abused them in so many other ways. It was a reference to an ongoing joke we had through the years of, ” It’s Dad. He eats anything.” The abused cookies weren’t the same ones we gave him, but it made for a good laugh.

Fast forward to high school and I made several projects, mostly for graphic design and video design class.  My favorite from that era was “A Little Guy With a Big Problem.” I got huge props for the scene where the little guy wraps himself in a washcloth and jumps out the window.

A Little Guy With a Big Problem (2001) from Procoverage (Bryan Fox) on Vimeo.

In college, my two most memorable movies were “Edge of Torment” and “Four Minutes.”

Our purpose of “Torment” was to depict what a “live-action anime” would look like.  I wasn’t even an anime fan, but when Tim suggested the idea, I thought it was pretty cool.

Edge of Torment (2004) from Procoverage (Bryan Fox) on Vimeo.

“Four Minutes” was a cloak & dagger action movie, heavily inspired by the John Woo and Robert Rodriguez movies I was watching at the time. I loved implementing the post-production special effects with Autodesk Combustion and Adobe Premiere. Bulletholes and the dust they kicked up were completely done with Combustion. Muzzle flares were also done in Combustion, but the lighting change upon the gun user was done frame-by-frame in Photoshop. I was proud to have this movie shown in the Phoenix Film Festival, even though I couldn’t make it to the event.

In 2009, I made a batch of a few more films, mostly for Filmfights. My favorite was “Special Delivery.” I loved how the final product came out despite the fact that it suffered a lot of setbacks (including cast and crew bailing on me). I worked around the issues and I think I ended up with an even better product than I would have without the issues.

I haven’t done any filmmaking since but may come back to it. It’s still been a dream of mine to complete a full-length indie movie.

Memories
Previous Post
Leo’s Lesson: If You Have a Pet, Get Insurance
Next Post
Review: Vilros Raspberry Pi Retro Kit