Review: Beasts Beneath the Flesh

Being the superficial reader that I am, I was intrigued by the book cover art that author Joe Colomban posted on Twitter for his upcoming book, Beasts Beneath the Flesh. The artwork by fantasy and sci-fi legend Boris Vallejo is a really cool throwback to the fantasy book covers of the mid-20th century featuring ripped barbarians and chain-mail bikini-clad women. I had no idea he was still alive and taking commissions. This couldn’t have been cheap and that means Joe takes his marketing VERY seriously. 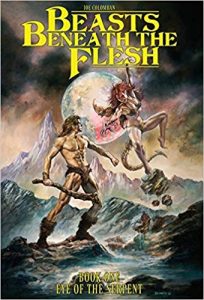 Seriously, this book cover looks right at home next to John Carter of Mars on the bookshelf.

So all that being said, I shot Joe a PM asking if I could do an advance review on his book and he sent me the EARC. Way cool of him to do so.

So onto the story. The Serpent Wastes is a badland-type region where humans are ruled by a race of serpent-men known as the Damu-yhig (I’m just going to call them Damus for the remainder of this review for brevity’s sake) who are mostly interbred to some degree with humans. Colomban gives these antagonists a rich culture and a caste system in which the amount of reptile in your heritage depends on how much magical power you innately have and how much respect you get. This is way cool stuff.

While this backdrop is nice, the plot unfortunately had some issues that hold it back. For starters, the book starts with a “Running From the Bear” opener. Willem, an Ecrecian Legionnaire at war with the Damus has his moment where he realizes that the soldier life just ain’t for him on the opening page in the midst of a huge battle. We have no idea who he is and why we should be rooting for him. These openings work much better in movies than in books.

Next chapter, we move on to Bat who is a lieutenant in a rebellion to overthrow the Damu-controlled city of Xent. We do get an establishing “kick the dog” moment for the Damus where they kill a human citizen for some ritualistic needs. And then it’s viva la revolucion! For a few more chapters, we’re introduced to many more POVs before we even get back to one of the characters we were shown at the start. It unfortunately makes it REALLY hard to get invested in the characters, especially when we still know very little about their backstories at the 25% mark.

Arri, a privateer-type officer on board a ship is the most likable since she’s the badass take-no-crap Han Solo type and we get a lot of establishing moments in her early chapters to show this…and then we don’t get anything of her for the middle third of the book. 🙁

I think the story really could have benefited more from cutting the cast (or at least the amount of perspectives) down a bit. I can see this is why many literary agents refuse to look at manuscripts with more than two POVs. By the 50% mark, major characters do start dying and many disparate POVs end up together which thins the herd and streamlines the plot a little better.

To be honest, it doesn’t feel like a first book in the series, but more like a second or third in an ongoing serial. Colomban calls this book modern pulp fantasy, so maybe this was intentional. Despite this storytelling issue, it gives Colomban the golden opportunity to write a prequel or two to give us a better introduction to the characters and get us more emotionally invested in them. From there, jumping into the trials in this book will have more impact.

What did Willem do before he got drafted for the war? Show me the nice life he had which was taken away from him. The same thing goes for the other companions he makes in the desert along the way. Show me Bat’s loved ones being abused by the Damus and give us that defining moment where him and Zaeim decide to start piecing their rebellion together.

Thessalia, a Damu noble who plays second-fiddle to her more purely bred sister is also one of the more interesting perspectives we see since she’s among the enemies and we get to see some in-fighting and more of the inner workings of the enemy.

If you can put up with the opening quarter of the book and the fact that it takes a while to get into the characters, the plot does take some interesting twists and turns. If Colomban goes back and gives us a prequel or two with some more in-depth backstories of the characters, my opinion of this book would vastly increase. It just feels like a middle act. It wouldn’t be the first fantasy series to do this either. Chronicles of Narnia, The Witcher, and other AAA-list fantasy sagas have gone back with prequels to let us know what has happened before the first published book, and I hope this one does too.

Beasts Beneath the Flesh is available on Amazon The book drops January 14, 2020.