I was looking to take a break from reading sci-fi and fantasy, so I took the opportunity to read and review CV Hamilton

Vegas detectives Cheri Raymer and Tony Pizzarelli put together the clues to solve the murder of Maxwell Beacham-Jones after he is horrifically killed while performing a Las Vegas roller coaster escape illusion. 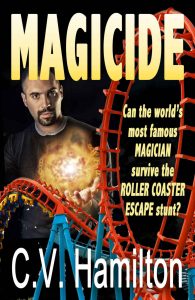 If you’re a fan of the show CSI

: Las Vegas on CBS, I highly recommend you pick this book up. Right away, I can tell you’ll like it. It reads like an episode of the show (with original characters of course) and I mean that as a compliment in the highest regard. It hits all the beats one would expect an episode to hit. The book also had a very nice rogue’s gallery of suspects, most of them other magicians and all of them have good motives. Hamilton’s research efforts also shine in the methodology in which the police tackle the case.

Normally, having several POVs in a story is a kiss of death, but this story actually pulls it off because there’s some sort of theme transition between POV changes.

I had very few issues with the story itself. Probably the biggest was trying to figure out what year the story took place. It was really inconsequential to the story, but it just kept nagging at me when I was reading.

The publication year of this novel was 2014. The location of the opening chapter was at the Dunes Park Casino (which I assumed was a fictitious version of the Dunes Casino which was demolished in 1993). Cheri was using a Palm device and a flip-phone which would have placed it before the smart phone revolution of 2007, but after 1997 because there’s also a DVD-R MacGuffin. Finally about a third of the way through the book, one of Maxwell’s stage crew had a “2006 Tour” shirt on which made me settle into the idea the story was in that year. This was finally confirmed with Cheri’s son being sixteen and her having told him that his father died in Desert Storm.

This leads me into the next issue I had which was Cheri’s son’s real father. It’s extremely obvious who the real dad is from the first few chapters. The book drags along the reveal and plays it way too coy to the point where it was annoying.

An interesting issue to think about is Cheri’s relation to all the suspects/victims. Her estranged best friend Larissa is a suspect. She knows the victim, Maxwell. Her son is an apprentice of Maxwell’s teacher, Robert the Great, who is also a suspect. In real life, there is NO WAY Cheri would have been put on this case. Does this departure from realism work in this story? ABSOLUTELY and it’s totally forgivable. We’re given a personal stake in the matter which invests us very deeply in Cheri’s character.

I’ve also got a few comments about the end, so head on down to the spoilers section at the bottom after you’ve read the book.

Lastly, I’m a big believer in marketing, so I’ve gotta critique the books cover. Check out this other article to see why I’m so big on having a good book cover. This story was well crafted and deserves a wide audience. Disappointingly, the cover is very amateur and will hinder the potential audience the book is exposed to. Considering that the website for the cover designer, After Ten Design, is now defunct, I find that is a bit telling. I hope the designer isn’t a friend or family member of Hamilton’s because I’m going to get very critical of it as someone with a design background.

The title is fine, the tagline is okay, but the author’s name gets jumbled up in the roller coaster photo.  The photo of the magician holding the fireball is cool, but it’s just his upper torso floating there. It should have been faded out toward the bottom instead of an abrupt cut-off.

The roller coaster photo is the worst part. The cover would have worked better either without it or with it behind the magician. It also could have been moved to the back cover since there is no artwork on the back (although the typography is fine). The fact that the coaster is poorly cut out does not help. It’s very obvious the sky behind the coaster was selected and erased with the “magic wand tool” in a photo editor. There’s even bits and pieces of sky left behind which the artist failed to clean up.

I’m not sure if Swift House Press is a self-publishing company or a small press, so I’m not sure how much freedom Hamilton has with her cover. That being said, she would benefit greatly from having the cover redesigned. Good looking covers sell books. Theres no getting around that.

Magicide is available on Amazon and I recommend it.
CV Hamilton

also has an extremely eclectic bibliography from other novels, a memoir (which I’m really curious about now), guides to writing/editing, and even adult coloring books.

I was actually surprised that more characters didn’t “lawyer up” when they were questioned by the police. There’s that stereotype that only the guilty ones lawyer up, but you’d be surprised how beneficial it would be to lawyer up as an innocent person. Many innocent people have been bullied or tricked by crooked law enforcement into saying false, yet incriminating statements. It would be fresh to see a crime drama buck the trend and have an innocent party lawyer up.

When it came down to the surprise twist at the end, I had the suspicion that Maxwell’s death was faked, but I had no idea how it would go down. I’m still a little confused to that. I also thought the ending was a bit abrupt and some plot threads were left hanging. I’m also surprised the police were unable to determine from the autopsy that the body from the Coaster accident was NOT Maxwell. The replacement body of Franklin must have been REALLY mangled beyond recognition. It was also really unclear as to how and when Maxwell swapped his body with that of Franklin’s considering the police secured him in place before the show. I did LOVE how Maxwell was thorough about making sure his plan went through and had a triple-layer plan to make that happen.

It also felt like a bit of a Deus Ex Machina how the tribe elder at the end poisoned Maxwell. We never get to meet Guido the loan Shark and I would have thought he would have caught up to Maxwell to get his money after he fled the country. On the other hand, not everything has to end poetically either.

Other victims like the families of the passengers of the coaster as well as Franklin who are also killed have no closure.

Robert also never performs the Bullet Catch illusion which I was expecting to be a big plot point at the end. Throughout the whole book, Robert was hyping this illusion up. I was expecting Cheri’s son to be in some danger or Robert to have attempted to shoot his way out of captivity or to have killed himself due to the shame of what was on the DVD.

I did like the reveal of what was on the DVD and how it was related to the seemingly unrelated missing juvenile boy that the other detective was working. There was just enough of a hint for me to figure it out without it being coy.