For the third review in my pandemic series, I took a look at 2000’s The Hades Factor by Robert Ludlum

. This was Ludlum’s 4th-to-last book before his passing. There was also a TV miniseries in the mid-00s and possible plans to reboot the show, setting it in the Bourne cinematic universe. 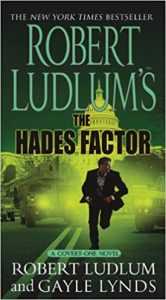 It details an extremely deadly bloodborne virus (an unnamed ARDS variant) which sweeps the globe, killing millions. Army scientist Sophia Russel is murdered when she got too close to finding its origin. Her boyfriend, Army doctor Jon Smith ::eye-roll:: picks up the mantle to stop it.

Between two NYT bestselling authors (and I’d wager Lynds was the workhorse on this book), I’m surprised they couldn’t put together a decent book, especially for it being the first (of what was at the time) a new series. I haven’t read any other books by Lynds, but I thoroughly enjoyed The Bourne Identity.

In short, the characters are paper-thin Mary-Sues with extremely little development over a long slog of a book. Since I’m not recommending it, I’m going full-spoiler in this review, so you’ve been warned.

The mundanely named Jon Smith goes through just about zero character development in the story aside from the trauma of losing his lady. He does somewhat mend the relationship with Sophia’s sister, Randi, who hates him for misdiagnosing her husband’s illness, leading to his death. Randi is a tough CIA agent who does some ass-whooping. Marty and Bill are Jon’s childhood BFFs. Marty is a computer whiz with Asperger’s Syndrome whose only major development is he overcomes his fear of firearms. Bill falls in with the bad guys’ conspiracy prior to the book’s opening and decides to betray them after Sophia is killed. He ultimately is killed by way of “redemption equals death” trope.

Rounding out the good guy fellowship is “Peter” who may-or-may-not actually have that name and may-or-may-not be a retired SAS operative. He’s the exact same person by the end of the story aside from a couple superficial bullet holes. Peter’s go-to weapon is an Enfield bullpup assault rifle which he would have used in the military given the time period the book takes place. On the surface, it makes sense since a lot of retired US vets from the Vietnam era onward like AR-15s since they look and operate similar to an M-16.

The only problem is IRL, the Enfield Bullpup is unreliable trash and not even a retired serviceman who had been issued it would use it. Even the UK servicemen at the time hated it. My source for this opinion is the highly informative Forgotten Weapons channel on Youtube.

On the bad guy side of the equation is Victor Tremont, the VP of Blanchard Pharmaceuticals. His grand scheme was to release the virus into the public  throughout the 90s via routine antibiotic injections and then make bank off the cure found in the blood of monkeys. Dude, you’re a pharmaceutical executive. Why would you risk your fortune and career when you’re already a gazillionaire living in a wicked-nice mansion in the New York Adirondack wilderness? He also creates a liability when his boss finds out, so he’ll either need to be bribed or killed.

Temont’s number one bodyguard is Al Hassan, a stereotypical 2D Muslim terrorist. The only reason he even needed to be Muslim was to be able to chase our main characters with ease through their brief trip to Iraq. The rest of Tremont’s men are faceless goons without any backstories; maybe one or two get names if they’re lucky.

I can’t fault the authors for this, but it’s pretty funny reading this pre-9/11 story talking about Saddam Hussein’s regime and how badass the Republican Guard are. Yeah, disconnects like that are going to happen when you read older contemporary fiction. We’re going to have that now when we read futuristic sci-fi written prior to 2020 that completely ignores the COVID-19 pandemic.

Now onto some science stuff. So when the bad guys find out Sophia is onto their little plan, they break into Ft. Detrick and inject her in the ankle with the virus, leading everyone to believe she simply became infected with it. Nobody but Jon wants this investigated and they conduct an autopsy just to shut him up. He demands to be present in the autopsy (well THAT sounds like a conflict of interest).

They finally discover the needle track and the autopsy doctor asks Jon this doozy, “Is Sophia diabetic?” Huh? When the hell has a diabetic ever tested or injected through their ankle? They’re supposed to do that where there’s some soft flesh to work with, not a bony area like an ankle. Literary and cinematic fiction is RIFE with inaccuracies regarding diabetes, especially type 1. I plan to set the record straight on that one in a future blog post.

Now onto some more gun stuff. Jon’s weapon of choice is a Beretta pistol. I’m presuming it’s the M9 since that was the US military’s standard issue at the time of publication. Makes perfect sense. What I hate is that Jon is a goody-two-shoes who never wants to kill the bad guys who are chasing and shooting at him. What I mean by that is when he shoots bad guys, he almost always goes for leg shots. Some doctor he is. I guess he skipped class when he learned about femoral arteries in the leg and how you can bleed to death when shot there. The “shooting people in the leg” trope in fiction needs to die. This is why in the news when someone is in a defensive encounter against someone not armed with a gun (but is aggressor still using deadly force), the media or anti-gun folks want to wail and say “WhY dOn’T tHeY jUsT sHoOt ThEm In ThE lEg?!” 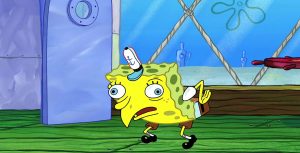 There’s one part in the beginning where Jon disarms a bad guy using a Glock pistol and the book describes him, “bringing it up, cocked.” Huh? Glocks have no hammers. They can’t be manually cocked. Many folks misuse the term “cock” to mean the manual cycling of the slide without firing it, usually to chamber a round or clear a malfunction, but this was not what was being described. Over a decade later, we see the same mistake in Ant Man where the ants block a computer generated hammer from dropping to fire a Glock pistol.

Lastly, let’s talk pandemic stuff! That’s why I read the book twenty years after its release and that’s probably why you came to read this review. So right before Jon leaves Iraq for the final act of the story, he finds out the pandemic has broke worldwide, killing millions already. Right off the bat, the authors keep using the expression “worldwide epidemic.” Just call it a pandemic! It’s the same meaning and less words! There’s talk of hospitals being flooded which makes sense. Next, when the characters are traveling, there’s no indication that there is a pandemic. No talk of businesses closed, no talk of a breakdown in supply lines, no societal unrest, nobody panic-buying food or survival supplies, nothing. And everything goes back to hunky-dory in the epilogue. I know the virus is bloodborne, but you don’t kill millions worldwide without things getting disrupted!

I bought this book used for 25 cents at the local library before the governor shut it down due to COVID-19. Now that I’m done with it, it’s going right in the donation bag. I’ve said before I feel bad when I pan an indie author, but these are NYT bestselling authors. I expected better. Ludlum has passed away and if Lynds’s feelings get hurt, she can wipe her tears with some $100 bills.

The Hades Factor is available on Amazon, the Kindle version being an atrocious $9.99. Take that money and buy two or three e-books by some good indie authors who I’ve reviewed.