I’m not a member of the LDS (Mormon) Church, but I’ve been accused of being one of several occasions. Maybe it’s because I’m so friendly and clean-cut.

I’ve got nothing against Mormons either. They’re some of the nicest people I know. Some of the best authors and doctors I know are Mormon. Most Mormons are Second Amendment absolutists because of Missouri’s Executive Order 44 (think of it as a mini-“Holocaust with a dash of the Trail of Tears” against the Mormons in 1838), so they don’t play when it comes to tyrannical governments.

Mormons are also good sports about being made fun of as long as you’re not outright mean. The LDS Church actually purchases advertising in the program for “The Book of Mormon Musical” which is a musical from the creators of South Park that makes fun of them. South Park also had an episode about Mormons. I haven’t seen the episode myself, but people I know who’ve seen it actually say the show portrayed them in a very fair manner. 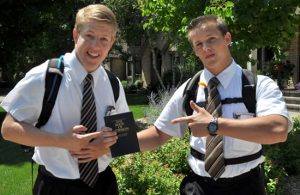 So anyway, back to my story.

Back when I was six years old, I didn’t know what religion was yet. I was playing in the schoolyard during recess and some kid comes up to me and asks, “Bryan, are you a Mormon?” I did not know about religion at that time. I had no idea what a Mormon was and thought it was a foreign country. I defiantly responded, “I ain’t Mormon! I’m American!” I’ve gotten the question asked in school several times since.

Years later, I was browsing the baking aisle at Wal-Mart and a random person walks up to me, asking without any preamble for directions to the nearest Mormon church. I swear I am not making this up!

I guess I’m gonna have to get myself tattooed up or something. No one will question me anymore. Just kidding. Tattoos aren’t my thing either, but that topic will be for another day.

I leave you with this video clip of an LDS missionary taking some armed muggers to school (hilariously narrated by a former Protestant preacher).