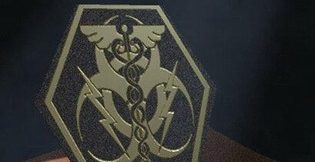 With the COVID-19 (Coronavirus) panic sweeping the globe, I thought it was worth revisiting The Immortals by Tracy Hickman. Hickman writes almost exclusively fantasy, so this dystopian tragedy tends to stick out in his bibliography. 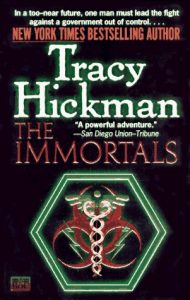 I first heard about it on his Dragonhearth podcast back around 2007 when he and his wife Laura released a free audiobook version on Podiobooks (now Scribl). While audiobooks aren’t my thing, I listened to the first chapter and was hooked, so I purchased a paperback copy to finish.

Published in 1996, the story takes place in the “future year of 2010” in a world where a botched vaccine for HIV has become an airborne version of the virus known as V-CIDS. All patients are rounded up and put into concentration camps to prevent the spread of the infection. Jason Barris, a gay man who’s been disowned by his father is captured and put into one of these camps. Michael Barris, Jason’s father, sneaks into the camp to seek his son’s forgiveness despite knowing he would likely catch the disease himself, making it a death sentence.

The book is an emotional look at how people behave when thrown together and have no choice but to wait until they die. I’ve never been moved to tears by anything I’ve read, but the “Amanda chapters” in this book are the closest I’ve gotten. Powerful stuff.

As far as dystopian fiction goes, it’s what you would expect and it’s interesting to see the parallels to what’s going on with COVID-19.

-Stories of airport checkpoints where people are being zapped with temperature lasers parallel the V-CIDS patients being marked with red circles on their foreheads and microchip implants. If they escape from the camp, specially guided munitions are fired at the patients, ending them quickly.
-Hastily constructed prefab hospitals in China parallel the hastily constructed concentration camps.
-Viral videos on the internet of suspected COVID-19 patients on the run from Chinese quarantine teams parallel Jason Barris’s flight from the quarantine teams in the first chapter.
-Our ability to block and filter dissenting voices and create our own comfortable “echo chamber” on social media mirrors the I-Net which allows the same thing.
-Because there is so much media to consume in the world of The Immortals, entertainment is smaller and snappier which brings to mind sites like Twitter or Vine.

Where the book is severely showing its age is in its depiction of the LGBT community (simply called the G/L community in the book). Society has changed immensely since then. Keep in mind this book was published in 1996 when people had the notion that HIV was more heavily concentrated in the homosexual, promiscuous, and needle-sharing demographics. Trans folks are not even mentioned because they were an extreme rarity back then.

If I recall correctly, the Podiobooks version as well as the reprinted version from around the same time bumps the dates forward to 2020 (which we’re already passing this year) and removes some of the foul language.

While the book is starting to show its age, its emotional impact will never grow old.

The Immortals is available on Amazon.