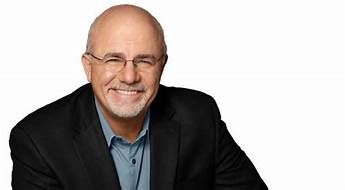 Now I Know Why Dave Ramsey Carries a Gun

I will cite a lot of Dave Ramsey’s tenets in this article. If you’re in a tight spot with your finances and don’t know where to start, his books will give you direction. His YouTube page is also a good, free resource.

Financial radio host Dave Ramsey has made it no secret that he owns firearms, has a concealed weapons permit, and carries his gun with him wherever he can. In one episode, he revealed he was armed in the studio and his co-host recoiled a bit from him. While you should never need a reason to exercise your Second Amendment rights, you can’t blame someone for wondering why a financial pen-pusher would want to pack heat.

Dave Ramsey reveals he’s packin’ heat in the studio in this episode.

Here’s why: When you tell someone they’ve made or are going to make bad financial decisions, some folks come at you with the angriest, most venomous responses.

One exchange I had on Twitter was when someone talked about a teacher, out of work from the shutdowns, who was running out of money to pay their mortgage. This exchange was many months ago, so I don’t feel like digging up the tweets. I said if they didn’t have an emergency fund of 6-12 months of expenses, they were a pretty irresponsible homeowner.

This person LOST THEIR MIND and said I was “the worst person on Twitter.” I then posted a link to Dave Ramsey’s Baby Steps program. I said “Well if I’m bad, then Dave Ramsey is bad too because that’s exactly what he preaches.”

Someone else jumped in saying, “Well it’s not like everyone can save up a half a year of expenses.”
Well, how the heck did you save up a down payment (because that’s probably the same amount)? Let’s totally take COVID off the table.
What if some other crisis came up?
-Car gets totalled and you need a down-payment for a new one while you wait for your insurance to pay out.
-AC or heater breaks.
-Car needs expensive repairs.
-Someone in the home gets hospitalized.
-The water heater breaks.
I’ve had to deal with all of those at some point and THANK GOODNESS I had an emergency fund.

Another person dog-piled on saying, “Why does everyone say ‘Buy a house or else you’re throwing money away,’ then say ‘You’re irresponsible buying a house!’ when you do buy a house?”
Go back and listen to some Dave Ramsey episodes. He says there is a time and a situation for home ownership and a time and a situation for renting. If you don’t have a six month emergency fund, you should probably be renting, because if the water heater goes out, you won’t be on the hook if you rent. Your landlord will.

The second nasty exchange I had was in late July when the $600 unemployment enhancement (PUA) was running out. My local newspaper tweeted about this. I reposted this blog and said if you didn’t bother looking for work, the job market is going to get seriously competitive when the enhancement runs out.

Once again, I got so much hate, much of it from people that this didn’t even apply to. It got so bad, I just deleted the tweets because people didn’t get my point.

People who worked executive positions were hating on me when my comments were aimed at people working retail and foodservice (because most of these people in retail or foodservice got an effective raise with PUA).

People who didn’t want to look for a new job because it was “outside their area of study in college” were also spewing hate at me, but I know a thing or two about getting a degree and the pain of pivoting to an unrelated field. My parents know that as well, but that will be a subject for another blog post. Just know that it can be done.

My wife made a great point for all the doom-and-gloomers. Are these tough times? Of course, but our ancestors also survived the Spanish Flu and the Great Depression. This is pittance compared to those two crises.

I’ve cited a lot of Dave Ramsey’s tenets in this article. If you’re in a tight spot with your finances and don’t know where to start, his books will give you direction. His YouTube page is also a good, free resource.