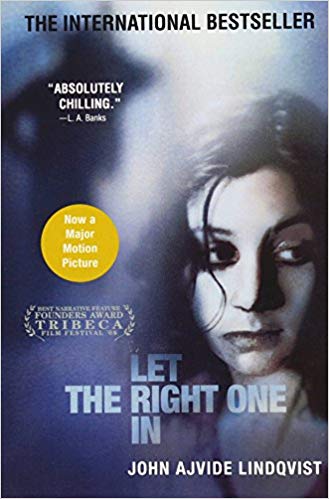 Let the Right One In Book Review

Warning: This review may contain minor spoilers that I personally already knew before reading the book but didn’t affect my enjoyment of the story.

Let the Right One In (also published as Let Me In) is an horror story in the 80s about twelve year old Oskar who befriends Eli, a new girl in his neighborhood. Things heat up in the cold winter of Sweden when Oskar is brutally bullied by his classmates and people in the neighborhood are mysteriously murdered.

I picked up the novel because I  loved the movie so damn much and the book turned out to be pretty excellent as well. Some parts the book pulled off some scenes better while others I appreciated how the movie handled it more.

The big reason most of the altered material from the transition of book to movie was because it would have either bumped the movie’s rating up to NC-17, would have required too much Hollywood CG. There were also some unneeded subplots from the book that were cut. Many redundant scenes (such as Oskar’s fascination with murder news stories or Eli’s inability to eat human food) were also combined together in the movie.

While it was good to see the Russian submarine subplot abandoned in the movie, its presence in the book does ground it into reality by letting you know that, “Yeah, there’s murderers and vampires running around town trying slit your throat and suck your blood but we also have a Cold War to deal with.”

Another review I read stated that Eli was a little more heartless in the book than in the movie which is true. I think the decision to humanize her in the film could have come from the fact that director Alfredson and author Lindqvist realized they hit a goldmine when they cast Lina Leandersson for the role and saw the raw emotion she could bring to the table.

If you’ve seen the movie first, the real treat in the book is how the reader will appreciate how it will answer many of the issues and questions left unresolved by the movie.

Not knowing these facts won’t affect your enjoyment of the movie, but going through the book after seeing the movie it was based on is like reading the script for an extended cut of the film (wise words from an art teacher I had).

As much as I enjoyed this book, there were just enough bugs with it that I just can’t justify giving it a perfect review. First, I was surprised to see how many spelling and grammar errors (I counted around 6) which I’ve never spotted that many in a traditionally published book before. This is obviously not Lindqvist’s fault since he didn’t translate it and it didn’t interrupt from the story (it actually provided a cheap laugh or two) but I’m surprised the story wasn’t given another once-over before the movie tie-in edition was released.

Another problem I had was that there were inconsistencies with the laws of the universe. Lindqvist couldn’t decide whether or not post-mortem Hakan was a vampire or a zombie after he was bit since he lacked many vampire weaknesses such as being required to be let into a building and being able to live without a heart. Some explanation would have been nice on why he performed differently than other vampires.

These hindrances aside, you’ll love how many of the traditional vampire rules are present in this story along with a few new interesting ones like what happens if a vampire enters a dwelling uninvited or what animals don’t take kindly to vampires.

I feel that what truly makes a horror story horrifying is the addition of real life terrors that could affect us and Lindqvist nails this aspect on the head many times. Vampires ripping your head off can be almost comical since we all know they are not real and therefore cannot do those things. However, when you have despicable human taking care of a monster who is represented by a 12 year old girl for the sole reason that in hopes that he can one day molest her, that really grounds the story in a surreality because something like child molestation or kids picking on you at school can really happen and it’s those things that really make us scared or feel sorry for someone. If that’s your definition of good horror, throw this book into your shopping cart immediately.

Then see the movie…