Take the “S” Off Your Chest!

Disclaimer: I am not an attorney. All legal opinions are educated guesses.

People can get really sensational on social media, I mean REALLY sensational.

My wife and I were watching the Netflix documentary on the Hotel Cecil and the Elisa Lam death. It was crazy seeing how many self-appointed sleuths on social media thought they would be the ones to crack the case when they hadn’t even set foot on the hotel property (or at least until all the evidence was removed by police).

They even went after a Latino death metal artist (Pablo C. Vergara) who had stayed on the property a year prior, despite that he could prove he was out of the country when Lam died. Even with this proof, the “social media sleuths” sent him death threats and continuously reported his social media accounts for abuse until they were taken offline, essentially ruining his death metal career. He has shifted gears to film production and I wish him the best.

It reminds me of an incident that happened a year ago in Vegas.

There was a guy, we’ll call him X to protect his identity, who posted on social media some information and photos of a possible human trafficking situation that happened at a hunting and fishing store that he works at.

X is a man who suffers from classic Superman Complex. X believes he is the standard bearer of justice, the only man who can bring the bad guys down and restore what is right in the world! 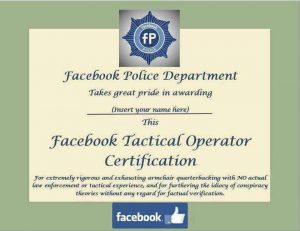 X claimed that he saw an elderly man groping and kissing inappropriately on an underage girl he was with. Surely any decent human being would be rocked to the core if they saw this. He logically filed a report with the police, giving the suspect’s vehicle plate. I won’t repost any of the photos for reasons I’ll give below.

The girl he was with had an uncanny resemblance to a high-profile missing child from another state. So far, so good. The possible suspect also was holding the girl in an odd, restraining fashion. Sure, there’s a chance the girl is special needs and needs to be restrained, but hey, it’s better to be safe than sorry.

What I do have an issue with is posting this picture publicly online. Why not post the pictures online you ask? Hasn’t a crime been committed?

The police have photos of the alleged suspect and victim. They have a vehicle plate. Let them vet the information and they will use social media and mainstream media channels to relay this information if it’s worth looking into. With X’s original post, it went viral. Several people were dogpiling in saying they were gonna “kick this guys ass” when they see him, or “grab the little girl to save her.”

I said hold up now!

What if this guy actually is innocent? What if this is a misunderstanding? If an angry mob tried to beat him up or take his granddaughter from him, it would be reasonable to assume he would be completely justified to defend himself. Heck, this guy was shopping at a hunting and fishing store. It wouldn’t be too far-fetched to wonder if this guy could be a legal gun owner who very well could have a concealed weapons permit. Attacked by a group, a single, elderly man could articulate disparity of force as justification to draw and use a firearm.

That factor aside, people were also accusing X of making the information up, pushing him even further into trying to be the hero himself. X later was given a lead of where the possible suspect lived. He live-streamed himself actually going to the apartment complex and lying to the security guard at the front to get in.

Police were already there. They actually did catch up to the guy, detained him, and questioned him. X goes completely overboard again by getting out of his car, announcing to the police that he made the original post, and said that he, “Came to see this through because people online were calling him out as a liar.”

Your ego is so fragile that you wanted to prove some naysaying internet strangers wrong? Grow up. Leave the police alone and let them work.

The police determined in their investigation that the possible suspect had done nothing wrong and cut him loose. My guess was that the little girl probably was special needs, and he had to restrain her during some sort of episode.

The next day the mainstream media and social media started harassing X and asking him why he provided false information to the police.

This pushed him even more overboard.

He started calling out this hunting and fishing store to release their security camera video because “he saw what he saw.” What he didn’t think about was the fact that the store was also his employer. I bet they probably didn’t take too kindly to that. X has since deleted all the livestreams of his “investigation” and deleted his account on the social media platform he was using.

Maybe his job threatened him. Maybe the police threatened him for not backing off. Maybe the person who he accused had threatened him with legal action since he was effectively slandered. Who knows, but this is a textbook case of pumping himself up with pride, leading to a much higher and nastier fall.

So the lesson learned is: Yes, if you see something, say something, but mind your own damn business after police are involved. Let them do their job.