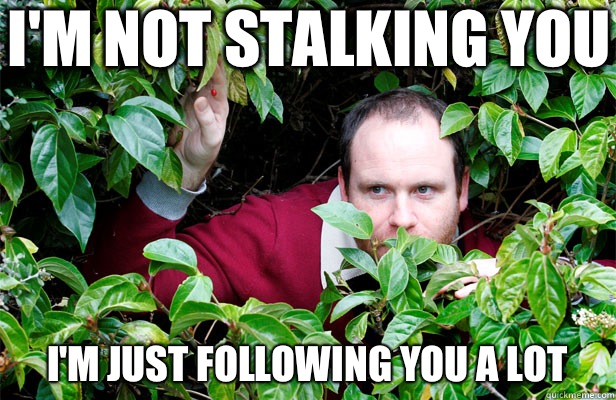 Abuse and Stalking of Literary Agents

I follow lots of literary agents on Twitter to keep my finger on the pulse of the industry. In what I would call a sub-trend of the #MeToo movement, I’ve seen so many of them post about abusive contact or creepy things prospective authors have done to them.

TLDR: BE PROFESSIONAL AND STOP WITH THE CREEPY SH*T!

I’ve been to two writers conferences (Leviosa 2016 [writers track] and Greater Los Angeles Writers Conference 2019). I’ve also been to Chuck Sambuchino’s Writing  Workshop which is like a mini conference. During the agent panels, agents have also recounted some of the creepy stuff prospective authors have done.

A big thing all agents complained about with conferences was being approached in restrooms. It’s suuuuuuper creepy to approach an agent when they’re getting ready to or having just done their business. The agents at GLAWC had said as a whole that they’re perfectly approachable at conferences. They didn’t come there to be the dieties you can’t talk to unless it’s paid time. Some even said they’d be open to an elevator pitch outside of a pitch session. Just use common sense and talk to them when you know it’s appropriate.

When it comes to their office, agents on Twitter or their blogs have recounted creepy prospective authors who’ve shown up at their office or even worse, their home in person, demanding them to read their query or sample. I understand many authors want to stand out from the pack, but this is not the way to do it. This jumps right into the realm of stalking because agents feel especially vulnerable if you know where they live. My day job isn’t literary related, but my home is still the place where I go to escape work. I’m sure agents feel the same. I doubt they want work following them, especially by a prospective author who could get triggered by a rejection and put the agent in fear of their life.

Going back to the digital world, this is where I’ve read accounts of some truly ugly stuff. Usually it’s female agents that get this abuse, and usually it’s male writers who dish it out after having been sent a rejection. On the mild side, they’ll complain or accuse the agent that they didn’t even read their work. Agents have to go through queries very quickly. Their submision piles are massive and they can’t give the time to submissions past a few paragraphs.

I’ve read about agents talk about getting death threats, rape threats, wishes that they would get cancer and die, and other ugly things. When you blast agents like this, you are very quickly going to be blacklisted by all of them. Agents talk and they share horror stories. They probably share blacklists.

My heart goes out to agents who have been given substantial threats of harm. I recommend every able-bodied individual learn and utilize whatever self-defense is legal in your jurisdiction: empty-handed, OC spray, kubotan, stunguns, up to deadly force such as firearms. There’s some real nutcases out there and everyone should protect themselves.

Getting rejected by an agent is not a big deal. You’re not going to die on the streets homeless (unless maybe you’re foolhardy enough to quit your job to write). Michael Stackpole

summed up the submission circuit in a very good analogy: roulette. Each agency is like a different roulette table and when you lose your spin, you get to take your chip (your manuscript) back and go to the next table. If you lose at every table, you write another manuscript and now you have two chips! You submit the new manuscript in the submission circuit and if that one gets picked up, chances are your shelved manuscripts very well could be picked up as well (unless there’s something very problematic about it).

The best way to communicate with agents is this: Treat pitch sessions like job interviews. Dress like you’re at a job interview. Treat queries with the professionalism that you would treat a resume and cover letter. This is supposed to be your dream job. Treat the query/pitch process like you’re applying for that dream job and it will go such a long way.