Hope you’re hungry for another WWII review, because I’m coming at you with Midway! Midway mostly entails the reenactment of the Pearl Harbor bombing, the Dolittle bombing of Tokyo, and the titular Battle of Midway. It’s directed by disaster movie mogul Roland Emmerich and has an all-star cast.

I’m not going to go into what is and isn’t a spoiler, because if you had paid any attention in history class, you already know what happens.

One thing I’ve got to say for sure is that this is a damn good looking movie. The battles, the scenery, and the CG all looks fantastic. The scenery has been a main character in and of itself in several Emmerich movies and and this does not disappoint.

When Pearl Harbor is in flames, you get that gut-wrenching 9/11 feeling like the country has been horribly violated (yes, I know Hawaii wasn’t a state yet). After the attack, soldiers and seamen are trying to identify bodies in the morgue and your heart breaks when the doctor talks about body parts coming in inside pillow cases, then the camera pans and you actually see the said pillow cases.

When Dick Best and his squad are dive-bombing Japanese ships, you feel like you’re about to have a panic attack because the perspective is either in first person or over the pilot’s shoulder. There’s a wall of anti-aircraft fire coming right for you and you feel like there’s no way to avoid it.

I can foresee some critics calling the actors’ portrayal as a bit on the cliche and cheesy side, and I feel the same way too. Whether bad writing or not, I don’t mind because it still gives the film that dated 1940s feel. The fake east coast accents will be off-putting at first, but you’ll get over them. 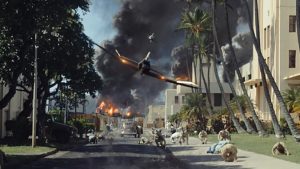 My favorite actor was Aaron Eckhart as General Jimmy Dolittle. That guy totally oozes with gravitas while on screen. He unfortunately appears and disappears at the opening and closing of the second act since his mission ultimately stranded him in China for quite some time. I’d love to see a movie base on just his exploits.

Fun history fact: Despite Dolittle’s attack’s “do-little” damage (I remember making that pun in middle school), he was still celebrated as a hero and all-around badass for the amount of psychological warfare he inflicted on Japan and the morale-boost it gave America. Japan had to divide its forces to protect the mainland for the remainder of the war and it provoked their charge into Midway.

Nick Jonas plays pilot Bruno Gaido and while a bit of a minor character, he stands out as the deliverer of the movie’s PG-13 “precision F-Strike” which was very satisfying.

Woody Harrelson also delivers a fine performance as Admiral Nimitz who is surprised to find out he’s in charge of the Pacific front of the war (in a scene where you’re going to get a good chuckle).

When it comes to war movies, I usually have a hard time telling apart the side-characters and couldn’t even tell you their names to be honest. They’re all dressed the same and groomed the same. This movie is no exception. Same with Dunkirk (which I also highly recommend). Genre military fiction tends to go over the top with differentiating between the characters so they don’t get lost in the mix.

Musically, I loved it. The music is very reminiscent of the panic-inducing tones from Dunkirk, but louder and more bombastic. It really captures the desperation of the soldiers.

The movie also does a good job of fairly portraying the Japanese. There’s no cartoonish villainy here. I do wish we would have seen more of the low-level pilots. We’re only given good screen time to the higher ranking officers of the Japanese army/navy.

Midway also touches on some of the mishaps and malfunctions that happened while not in combat. I also read a lot about this in “A Higher Call” and it surprised me how common this was. It’s bad enough when someone dies fighting for their country, but it feels like a sad waste of life when someone dies during a training exercise.

While the movie does have some roughness here and there, I really enjoyed watching it on the big screen. My wife is a big war movie fan and already wants to see it again. If you’re a fan of war movies, see Midway. If you’re patriotic, see it. If you dig history, see it.

Movie Reviews / Product Reviews
Previous Post
Why You SHOULD Judge a Book by Its Cover
Next Post
Review: Last Christmas