Disclaimer: This review is based on the advanced reader copy.

Before I get down to the review proper, let me give you a little primer on the author, Daniel Arenson

. He’s an extremely prolific self-published author. I’ve had a few short conversations with him on Twitter and he seems like he’d be the cool nerd pal you’d like to have a few brewskies with while playing some video games or Dungeons & Dragons.

Usually I shy away from self-published authors, no offense to Dan. I’ve been burned a few times. But Arenson is the real deal. According to this Huffington Post interview, Arenson makes enough from writing that he doesn’t need a day job. On release day for this book, I watched in real-time as it soared to #1 in several sci-fi subgenres as well as #120 in e-books overall. That’s really impressive considering an overwhelming majority of self-published authors flounder and fail.

If SoE 1 is any indication of the rest of his work, he’s a great writer.  I’d also attribute much of his success to his massive bibliography (this is a binge culture we live in) and the fantastic artwork on his book covers that would give the artists employed by Baen a run for their money. I hope Dan doesn’t mind me showing off some pics of the cover art in this review (created by Tom Edwards). Dan’s got higher resolution pictures on his Twitter. 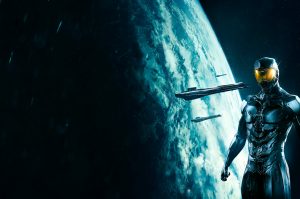 Getting down to the Earthrise saga, there’s three separate series which are ongoing and Daniel said that any book 1 is a good starting point to get into the saga. Soldiers of Earthrise is an interquel series set between the original Earthrise series and Children of Earthrise.

In what I would call a Starship Troopers meets Full Metal Jacket with a dash of Avatar, this mostly dual-protagonist story wastes no time in slapping you upside the head to show you how serious it is.

The opening chapter details eighteen-year-old Jon attending his brother Paul’s funeral right after Jon gets drafted to fight in a war on planet Bahay. The emotions Jon and his friends go through are so authentic and you get to know their loss so well without ever having met Paul. Then Jon has to go fight the same war his brother died in. Yikes!

The chapters mostly alternate between Jon and the other main POV of Maria, a Bahayan seventeen-year-old who gets caught up in the war to bring the planet Bahay under Earth’s control. Bahay feels like a stand-in for Vietnam, even though their citizens are descendants of The Phillippines. There’s even an Agent Orange equivalent used to destroy foliage cover used by the guerilla soldiers. They live alongside an alien race known as Santelmos who remind me of Ghostwriter from that 90s edutainment show on PBS. 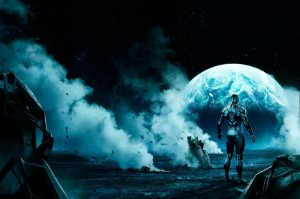 After reading an interview by Arenson about this book, it’s come to my attention that this story is more of an analogy to the Philippine-American war versus Vietnam, so keep this in mind.

With all the recent calls for diversity in fiction, it was really refreshing to see Filipinos get some major representation in this book. I can, however, see Arenson getting some guff for the “brown people not as advanced as mean oppressive military force” trope. I’m curious to know if Arenson has any ties with the wonderful Pinoy community. I work with and am friends with lots of Filipinos, so I was able to pick up some of the Tagalog that wasn’t translated. It was a cool bonus.

A few chapters here and there give you the POV of other side characters, but I feel these diversions hurt the story more than helped it. Some of the info in these chapters, if held back, would have given a bit more emotional impact had it come out to our main characters from their POV.

There’s also a couple of lines of dialog here and there that came off a bit cringy. The biggest offender broke up the awesomely somber mood of chapter 1 when Jon uses a racial slur for the Bahayans who killed his brother. The brother’s widowed girlfriend goes on a bit of a cultural sensitivity rant which I found a bit unbelieveable considering these are the people who killed her boyfriend.

The bully soldier, Clay also seemed a bit of a cartoonish bad guy. He’s done time for murder and is still drafted in the army. You’d think he’d be placed in a company of convicts only. It really gets crazy when he goes full white-supremacist mode when he gets his first taste of battle, putting swastikas (“Nazi runes” as Arenson calls them) on his body and wearing the stereotypical necklace of ears taken from his slain enemies. It’s quite the stretch that that none of the commanding officers do anything about this guy.

I also wish the tertiary characters would have gotten better development. Most of them are nameless “corporals” or “Kalayaan” soldiers.

Another observation: I had beta readers tell me that some of my cities in my book come across as a contemporary “Everytown, USA” as opposed to a space-age city. I took a lot of measures to change this in my own novel, while Arenson chose to roll with the Everytown feel for his cities depicted on Earth. I’ll leave it up to you if you like this or not. I feel really divided. I think the Everytown feel gives a feeling of safety and familiarity.

Now when we get to the Bahayan city under Earth rule: Mindao, holy crap do we get an emotional glimpse into a crapsack world. These chapters shine like a jewel in this story. Bahayans are all over town, just barely clinging to life, getting mostly abused by the Earthling occupants, and Maria is helpless to do anything about it because she, herself is in the same boat. Wow.

In Earth culture, it also seems like nothing historic or cultural is really mentioned between the present day and when SoE 1 starts other than the events of the original Earthrise series. There’s plenty of cool symphonic metal bands referenced (something I’m a huge fan of), but it’s like there were no new music bands, movies, or any other form of entertainment between today and when the book starts. Who are the big bands of the age when the book takes place? Movies? TV shows?

Getting down to the end of the story, I liked Jon and Maria’s first meeting. It reminded me Jaime and Claire’s wedding night on Outlander. The final days after this felt quite a bit rushed. It would have been nice to have stopped to smell the roses and have gotten a bit more out of the first few days of Jon and Maria’s relationship.

Lastly, I’ve got a bit of a gripe with the weapons terminology. Several times (including the final cliffhanger scene), characters are described using “flintlock” weapons and firing them in semiautomatic succession which is impossible. A flintlock weapon takes 15 seconds for even a skilled person to reload between shots. I think the more practical “obsolete-sounding weapon” to depict in those scenes would be a lever-action rifles, bolt-action rifles, or black powder revolvers.

This is an entertaining primer on how a flintlock weapon operates.

Although I’m not 100% sure how real modern military forces carry their rifles, I find it a bit odd that while in the dangerous field, the soldiers would hunker down for the night with their firearms unloaded. When the shooting starts, Character X would load their assault rifle and start shooting. I know many forces keep their weapons loaded with empty chambers outside of battle (Israel is the granddaddy of this trope to the point it’s called “Israeli carry”), but unloaded seems a bit far-fetched.

I know I sound like I’m ragging on Dan, but I wouldn’t be doing it if I didn’t believe in his product. When all is said and done, this was a really fun read and I still highly recommend this book for anyone into military sci-fi. Fans of Starship Troopers or The Forever War should pick this up. You’ll love this book despite its flaws and I eagerly await the sequel.