Review: The Girl Who Owned a City

This will probably be my last pandemic themed book review, and it’s a good one. The Girl Who Owned a City by O.T. Nelson is the granddaddy of dystopian YA literature, originally published in 1975. It’s about a neighborhood of children, led by Lisa who struggle to survive after all teens and adults on Earth are wiped out by a pandemic.

This book was required reading when I was in sixth grade, and it’s definitely at the top of the heap of required books I had to read in K-12. The cover featured below is the original 1970s version. The cover in the middle of the masthead is the 1995 reissue that I recently reread. There have also been at least two other reissues and a graphic novel. Differences I noticed in the 1995 version were a vague reference to the Rodney King riots/looting and references to personal computers and CDs, technology that hadn’t become mainstream during the first printing of the book.

I’m going to spend much of this review comparing it to current events and harping on the need for preparedness, so be warned.

There will also be mild spoilers from here on. 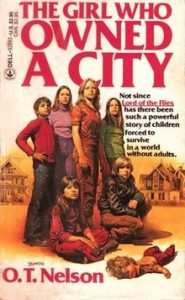 The beginning of this story is pretty dark. Lisa finds undelivered letters left behind by the people who wrote them in their dying days as she loots empty house after house. I think it really captures what kids would do the first few weeks if all the adults were to simply vanish. They raid the supermarkets and steal nothing but candy and cash, two things that will be absolutely useless in the end-times. Canned fruit and vegetables are untouched.

The book oddly does not address what happened to the last group of deceased adults who could not be buried or cremated. The graphic novel adds the side-effect of the virus turning the dead to dust to keep it kid-friendly.

Lisa thinks to head out of town to a farm, but it’s too late to utilize the livestock which had all died of starvation. She and her brother Todd stockpile canned goods from their looting runs, but are robbed and antagonized by by a gang of kids who live a few blocks over on Chidester street.

Believing that their only chance is to stand together, Lisa rallies her neighbor children into a militia and they scavenge guns, ammo, and create makeshift weapons and booby traps at all of their houses.

“Militia” is a word that’s been bandied about by the media lately as a gang of mean hillbillies who want to terrorize everyone when they don’t get their way. True militias are a group of armed folks who’ve formed an agreement to protect one another should the rule of law break down. You can see why they’re so adamant to protect the right to bear arms and why they show up to pro-gun rallies loaded for bear.

To reflect upon today’s events, folks actually were worried there would be brief breakdowns of law in pockets of the civilized world. We saw massive panic buying of firearms and survival supplies. Some gun stores in Vegas were sold out of firearms and ammo in mid-March and it’s still tough to find MREs and freeze-dried meals both in-store and online.

We thankfully did not see a societal breakdown in the US, but we did see the event horizon. Meatpacking plants and slaughterhouses are still struggling to keep open with employees getting sick. In New York City, there were days where 1/5 to 1/4 of first-responders were calling in sick. Thankfully with so many civilians staying home in lockdown, demand for their services had also gone down.

Other countries had it much worse. Food trucks were being raided and stores were being looted. Back in 2005, the southeastern US had a taste of “no rule of law” with all the chaos that followed Hurricane Katrina. Sadly, with all the panic-buying of food, water, and guns, many still haven’t learned that the government won’t always be there for them when disaster strikes. I’m also not trash-talking the folks who are financially unable to do so. I’m trash-talking those who are and fail to do so.

Anyway, back to the plot. That was a huge aside.

What makes Lisa such a realistic protagonist is that she makes lots of plans and isn’t afraid to put them into action after getting input from others. Many of them work, many of them don’t, and some work halfway. She’s as far from a Mary Sue as she can get.

There’s a couple kinks in the story here and there that hurt the realism. Some haters have pointed out that there’s no way Lisa would have been the first person to think to drive a car, or to loot a farm, or to loot a grocery warehouse. True, but this is a kid’s book. Much of the plot needed to sped along, especially in a short 200 page book.

The Girl Who Owned a City is available on Amazon. Read it and if your a parent talk with your children about survival and defense. They’ll thank you when they’re older.